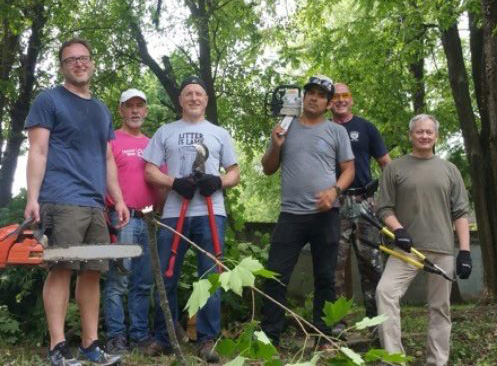 Friends of Beechwood Park volunteers hard at work in June.

At the Beechwood Avenue site — which park leader Brian Caudill calls a “forgotten piece of land” — volunteers cleared invasive plants and other overgrowth this summer with tools  borrowed from the Olmtsed Parks Conservancy.

The property is one block northwest of Mid-City Mall, a sliver never developed after the mall opened in 1962 on the land once occupied by the German Protestant Orphans Home, The Courier-Journal’s Martha Elson wrote, in a June story about Crescent Hill and Tyler Park home and garden tours.

Vacant land remains where the homes stood along Beechwood, and the area in back behind a stone wall is covered in asphalt as part of the mall complex. The wall occasionally is spray-painted with graffiti, and walkways leading to the “phantom houses are still discernible in patches under the grass,” neighbor Charlotte Whitty wrote in an essay about the park plans called, “They Paved Paradise.”

Neighbors on Beechwood Avenue in the Highlands are planning a community park on an undeveloped lot for everyone to enjoy. We welcome your support!